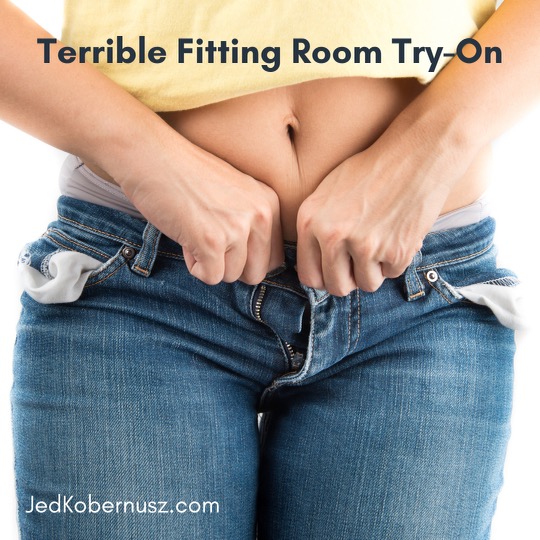 Meet Susan, she is in her late 40’s and loves to try on clothes at her boutique. She tries them on in private. A terrible fitting room try-on is her worst fear. Before working with Jed Kobernusz she had a major issue with her business. Susan knew she needs to be the face and be the one trying on the clothes, but she just can’t seem to get her health in order to do so. Therefore she has other people try them on for her and puts them on “stage.”

Susan secretly has always wanted to have the confidence to try on the clothes in front of people and be the first to present them to the public. Her body issues started as early as she could ever remember, which was in middle school. Basically puberty “ruined her life” as she remembers. Since then she’s always been her own worst critic but still loved trying on clothes.

What drives her the most is helping others find that perfect outfit that helps them bring out the way they feel. She saw a post on LinkedIn about Stressed Out Tyler. Susan could t believe that he lost 110 pounds with a person over the Internet. She knew her husband would be ok with the services. However, she was nervous to open up to a complete stranger.

Susan’s apprehension has always stopped her from becoming the person she always imagined herself to be. Exercising with personal trainers, workout videos, and at home programs because nobody could ever understand what she goes through. The personal trainers would push her too hard. They would always make her feel overwhelmed.

After her cervical spine surgery, she’s never been able to find anyone that could help her. She had a fusion of C5, C6, and C7. The physical therapy helped, but they only took her so far. The care that she always wanted didn’t come until after her PT was over. Susan thought if there was someone out there to provide modifications for exercises she saw everyone else doing she would be able to fit in.

Susan has grandchildren that she loves to play with. However, when she works out with personal trainers that don’t understand her physical abilities she is bedridden for a few days. She would be disappointed and depressed. Her mental health was wearing out too. That’s when she saw Tyler’s story.

A few days passed after reading Tyler’s story. She had enough of her current situation. Susan clicked the link at the bottom of that post and signed up for Jed’s newsletter. Susan then emailed him. She was impressed with his empathetic and nonjudgmental approach. After the first session, Jed made her feel strong. Even after she did push-ups on the wall she felt empowered.

Susan worked out with Jed every day. Working on her fear of a terrible fitting room try-on. One hour a day she works with Jed on not only her physical health but her mental health too. Her boutique was busy, but she always knew there was more to it than that. Social media was a major portion of marketing that she was too afraid to post. Because she was working with Jed for 18 months and felt she had changed so much she decided it was time.

The following Susan built in a short time was the proof she needed to know she was onto something. She had 5,998 followers in only two months. The engagement was through the roof too. She was blown away by the unconditional support she was receiving. She posted pictures of herself daily. Because of the pictures she always posted “Try-On” videos, which she thought was crazy. Jed helped her with that confidence in all of the conversations within the personal training.

When Susan started working with Jed Kobernusz she was a size 22. Susan is now a size 6. The permanent changes she made didn’t even come with loose skin. She’s seen so many people lose weight so fast and have so much loose skin because of it. Susan’s fear of a terrible fitting room try-on was no more. Her slow and steady approach that she learned from Jed Kobernusz, is something she is grateful for every time she looks in the mirror.

Her boutique is always full of people now. She even put Jed’s sayings “If You’re Willing To Change From The Neck Up, Then You WILL Change From The Neck Down!” And “Consistency Is > Than Intensity” in her boutique. People ask about it all the time. They love it and she tells everyone to go to his website. She actually takes their phone and puts it in their bookmarks.

Those two sayings resonate with her daily. Susan loves her new life as wishes everyone could feel the joy that she feels when she tries on clothes. The mirror can be such a negative experience and use to be for her. However, Susan barely remembers what it felt like to hate what she looked like in that experience.

While writing this I know that Susan’s Story is “Pretend.” However, she is out there right now putting on the news clothes she found at a great shop in Chicago. Since she lives in Rockford IL, Susan visits Jed twice a year for a week. She treats herself in the twin cities then heads north to Roseau Minnesota.

The recharge she gets from the in-person training is something she absolutely recommends to her friends, family, and colleagues. Susan may be “Pretend” but she will be here next week. We are going over her next project. Because she’s nervous to embark on that project, she also knows she onto something again. That’s the best part of my training. Seeing people conquer their “impossible” life experiences.

Susan has learned that once she makes up her mind and puts out the doubt, she can do anything.

If you resonate with Susan’s story go to JedKobernusz.com/Newsletter and sign up. After the confirmation email is sent, hit reply, and let’s create your story from thin air like Susan’s.